10 Rules You Must Follow When Visiting New York City

content="Whenever you are planning to visit another country, 10 rules you must follow When visiting New York City. These will help you to have a wonderful trip.

New York City, the greatest city in the whole world and financial hub of the United States is a must visit place. It has got many nicknames such as, “Big Apple,” “The City That Never Sleeps,” “Center of the Universe,” and “The Capital of The World.” The city possesses the best tourist attractions in the world and visited by thousands of people every year. Some of the renowned places include, the Brooklyn Bridge, Time Square, the Empire State Building, the Statue of Liberty, the Central Park, the Broadway, and so many museums 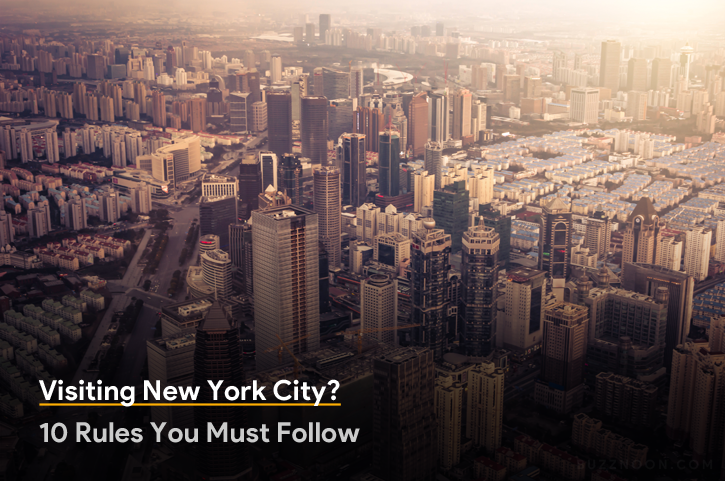 Whenever you are planning to visit another country, keep in mind that you also need to follow the certain rules. A famous proverb “When in Rome, live as the Romans do” must be keep in mind when you are traveling to New York City. Following these rules will help you in staying safe and to have a wonderful trip.

The legal drinking age to drink Alcohol in New York City is 21 years. In many pubs and bars, they even don’t allow the people under 21. Restaurants and bars are not allowed to sell liquor from 4am to 8am daily. So if you are under 21 or traveling with one who falls in the category, don’t ask for a drink.

Smoking is not allowed in New York City in public place as well some indoors like beaches, pools, parks, restaurants, and offices. You must refrain from smoking outside when having vacations there and try to smoke in premises of your hotel room.

You may find a lot of interesting people in New York City but avoid staring them. They can confront you that why you are continuously looking at them and it can cause you trouble.

The primary mode of transport of local residents is their feet. You need to walk in line with your family and don’t block roads. Don’t walk with more than one person in a row. You must also avoid sudden stop while walking. If you are a slow walker than you can use buses, regional trains, and cabs.

Avoid taking a horse carriage ride because of an ongoing debate to ban them in the city. You may find a few horses with honking cars but the best thing is to leave the idea to avoid any tussle.

Drop the idea of visiting Statue of Liberty up-close. The main reason is that less than 300 people are allowed every day to climb up the stairs to the crown. Tickets are expensive and most of the times they have been sold out in advance.

People in New York City may be rude to you if you come in their way or stare them. If you politely ask them for directions, they will surely help you. If you are unable to find a location, don’t hesitate to seek help from a resident.

You can eat on a subway but avoid having food that got a strong smell. It can offend the others near you.

Don’t halt and stop in middle of walking anywhere to look at a building, person, or thing in the New York City because it’s considered offensive.

Don’t forget to pay the tip to anyone who has helped you such as waiter, cab driver, hair dresser, laundry man, or luggage handler.

Things You Should Know Before You Travel To Turkey

Turkey is one of those countries in the world which provide you all the things. Here are few things You Should Know Before You Travel To Turkey.

Famous Landmarks In The World – 5 Top

Here we show a list of the 5 top and most famous landmarks for tourist attractions from around the world to take a trip this year. Keep this list in mind.